“at the time of writing”

At the time of writing Lillith is still at large but we are getting close to her capture. We have been tracking her movements over the past 24 hours and have put out lots of bait traps.
I sat watching her for about 10 minuites this afternoon. She sat washing herself not more than 10 meters away from me. Lillith looked in good health and relaxed.

This book was started just a few days before Drupal 7 was released in its first stable version. At that point, there were many modules (plugins) available in more or less stable versions, and many more were waiting on the starting blocks for their Drupal 7 versions. The examples in this book are based on what was available when the book was written, although a few cases also describe functionality expected to be available at the time of the release of this book.
It is likely that many of these issues will be solved when you read this book. 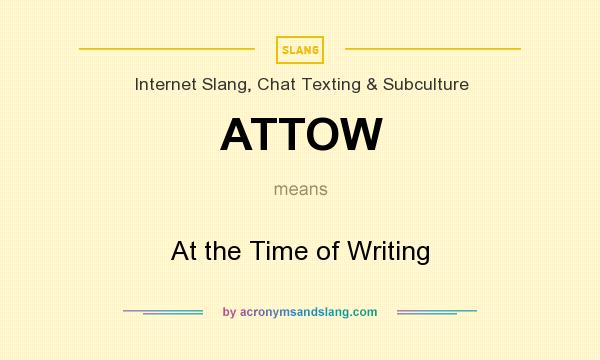 What does ATTOW mean?
What is the meaning of ATTOW abbreviation?